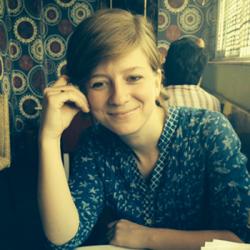 From food design to curriculum design, type museums to type foundries, we had it all this week in the 9th edition of our studio Show & Tell. I wanted to draw together the connections between our presentations, as Mohor did last week, but they didn’t seem so clear this time, besides of course their roots in design. Instead what we proved this week is that a studio is not necessarily made up of the same type of people. All the better for it I say, and a colourful Show & Tell is what this gave us this week.

So from the top, guests first, we had Mukul Goyal with us this week speaking about the amount of hard work that goes into making sure ‘the work’ to produce a product isn’t seen. Quality, in his handmade products, means striving for the best finish, consistently, and never needing to qualify inconsistency with a ‘but it’s handmade’ disclaimer. It made me think of that old adage, that great work is one percent inspiration and 99 percent perspiration. It certainly seemed so as he took us through the process of trying to find the right metal for the dancer’s leg on his Circumstance Clock. The clock plays with the idea of a dancer’s movement with her leg, the second hand, spinning around smoothly. To get this smooth movement, and not the rhythmical but less sylph-like second tick you typically find on a wall clock, required sourcing material from across the world. Many months later we have a product whose simplicity does not betray the amount of legwork behind it.

The Circumstance Clock by Mukul Goyal

Pragun’s talk explored another meticulous process. Banknote design, he explained, offers a uniquely challenging brief. The artwork has to represent the culture, history and heritage of a particular country or region whilst also being appropriate for release into mass circulation, to be used by people on a daily basis. It has to be difficult to copy, integrating new anti-forgery techniques, as well as being aesthetically pleasing of course. It’s got to be consistent as a currency and yet distinct from one denomination to the next. Pragun took us through some revealing examples of how designers have tackled this challenge: interesting connections between the designs of island nations and land locked countries, as well as the curious creation of non-existent bridges for the Euro. Most striking perhaps was the images he shared of the artwork in production, the scale being some 100 times the size of the final work.

Sijya gave us a brief glimps into the the world of food design through the recent exhibition ‘Milk Lab’, of which her work was also a part. The exhibition was held at Milk Factory in Paris and invited designers to reimagine and reinvent the way we use milk. The result was varied proposals which touched on sustainability and agriculture, and explored new ways of consuming and interacting with milk, as well as Sijya’s edible and biodegradable children’s modeling doh made entirely of milk and water.

On the subject of play and exploration Vidhushri presented a project which injected a sense of fun into microscopy, as well as attempting to make identification of malaria bacteria more accessible in remote areas. The answer, Foldscope, is a paper microscope designed by Prakash Lab at Stanford University. Part of the beauty of this project is how it demystifies the microscope from being something precious that needs to be protected to become something transportable that can be used anywhere.

From the simple microscopic to the sublime, Khyati presented two works by James Turrell.
In her own words:


I thought it would be interesting to see how people have used light as a tool, almost as if it were a tangible object. All these projects felt like magic. We know light reveals things for us to see, our perception is dependant on it. But when it is controlled, it has the power to trick us and create almost physical experiences. Graphic designers are constantly switching between tools. Perhaps we could consider using light the way these projects do, much like we use pen and paper.

‘The Box’, a film involving a plank of wood, light projections and robots and ‘Pixel Dance’, a performance that married dancers to dynamic projections, may be slightly beyond our studio skillset right now, but the way these projects raise the bar in terms of their own medium is something we can aspire to in our own practice.

This work reminded me of something Dahiya brought up two Show & Tells ago, that some of the people we most admire, like those we present in Show & Tell, focus intense time on a single idea or task, or a single medium in this case. The nature of a studio like ours however tends to be a collection of individuals with varied skills so that we can work on multifaceted work, for a variety of clients. And most graphic design programmes are set up to produce this type of individuals; designers with a palette of skills. So it was interesting to me that this week Dahiya spoke about designing a design curriculum. He touched upon trying to create a syllabus with a cumulative effect, each module building on the one before. Also important, he explained, was finding a way to integrate learning software skills into the curriculum, not in a way which is didactic but rather by setting briefs which in answering require the students to learn a particular programme. A combination of allowing students to still work and learn independently and still coming away with a hard skill that is tangible and applicable in their next project.

For my slot I presented the Chennai Government Museum, a place that, during the 4 years I lived in Chennai, I visited and revisited many times. One of the things that struck me about the museum, as a designer, was how it had become a kind of mini Tamil type museum. The museum houses a great display of Grantha script examples and epigraphy, but what has also happened, over the years, is that the lettering and signage around the museum has also preserved another more recent set of developments. What you also find, if you’re looking, is a move from relief lettering in stone, to hand lettering and metal type, to polystyrene 3D lettering, to LED signage with well matched Tamil and Latin characters, and everything in between. All this is reflects the time (over the last 100 years) in which it was created, it’s just a case of piecing together the clues. There is no type museum in Chennai yet (that I know of) but the Government museum comes close.

Aman presented the work of the writer-illustrator duo Kamla Bhasin and Bindia Thapar who over almost three decades, created posters and books for children on gender issues. Their output was prolific and their commitment to communicating complex subjects, often to resistant audiences, inspiring. But Aman explains it is the sensitive and optimistic tone they maintained, despite the gravity of the issues, that still draws him to their work many years after reading Malu Bhalu as a child.

All images from Poster Women by Zubaan Books

And finally, to bring us back to the task at hand – choosing the best way to communicate our personal messages, Shreeya concluded our session with a look at her foundry-of-choice when it comes to setting her Show & Tell slides. Heurta Tipografica, is an Argentina based type foundry, that has made much of its work available as open fonts. Alegreya, the typeface Shreeya focused on, was developed from a serif face into a fuller family which include a sans too. Alegreya was also the starting point for Heurta Tipografica’s in-development devanagari font, Sahitya, shown below.